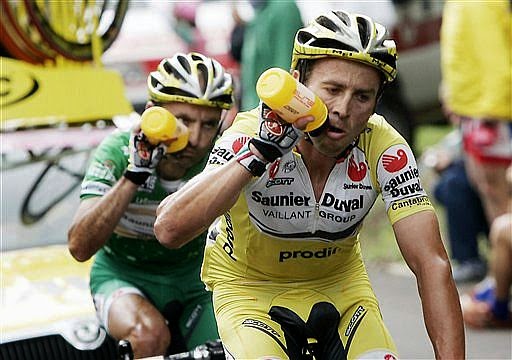 Being the second stage after the last rest day and already the last mountain top finish, only 142 kms in length and without any big difficulty on the route, there were perfect conditions for a very fast ascent of the terrifying, Monte Zoncolan. It was the very first time it was used from the Ovaro side. One of the most difficult climbs of the cycling world makes its appearance. "La porta per l'inferno" is opened to the riders.
Liquigas, the team of the maglia rosa, Danilo Di Luca rode the first few kilometers at the front, shredding the peloton to pieces. But the race really exploded when Gibo put one of his crazy brutal attacks. With six kms to go, the inevitable has happened. The great fighter, Il Killer di Spoltore, has been dropped. In the front of the ridiculous steep ramps, only three survived: Simoni, his teammate Piepoli and Andy Schleck. 200 meters to the finish line, "Il trullo volante" Piepoli started the turbo with Gibo on his wheel. The youngster Luxembourgish couldn't follow. The rest is history. 1-2 for Saunier Duval and a very solid record ascent.