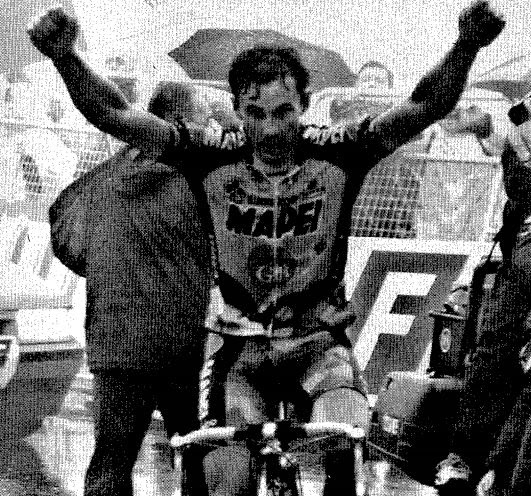 The already mythical ascent by then, the climb to Lagos de Covadonga made its appearance in the stage 15 of this edition of La Vuelta a Espana. The difficulties on the road from Oviedo, as always weren't important with only Mirador del Fito as the only other climb on the 160 kilometers route. The overall GC was lead, as it was the norm in the 90's, by a Swiss, the defending champion, Alex Zulle. A fierce battle was on the horizon for the other two podium places though, between Festina's Laurent Dufaux and Kelme's climbing goat, Fernando Escartin.
After passing Hospederia del Peregrino, on the first ramp, Kelme starts to play their beautiful tactics. Juan Carlos Dominguez attacks from the gun. Helped by the awful weather, he soon disappears in the fog. When the gap reaches 30 seconds, Fernando Escartin launches a blistering attack from behind. On the fresh  asphalt road, dancing in the rain, the Kelme leader catches quickly his domestique sent up front to help him. The ONCE team doesn't allow to the duo an advantage bigger than half a minute. On the first meters of the most difficult part of the climb, La Huesera, Escartin goes on his own. In the same time, Laurent Dufaux is dropped, asphyxiated by Jalabert's insane rhythm. This all uphill first part of the climb is raced at an amazing speed, Fernando averaging around 6.8 w/kg for 21 minutes. Obviously not enough because he slightly manages to gain fifteen seconds on a super select group of four: Jose Maria Jimenez, Laurent Jalabert, Alex Zulle and Pavel Tonkov. In the last three kilometers, the Russian leaves the ONCE riders and goes for the victory, passing like a motorbike poor Escartin. It was the second stage win in three days for Tonkov who will abandon a day later in order to meet his newborn son.
With this performance on such a mythical mountain, Pavel Tonkov's place in the climbers hall of fame of the cycling's modern age is guaranteed. It's the fastest ever recorded ascent on Lagos de Covadonga and it might take some time to see this record beaten...