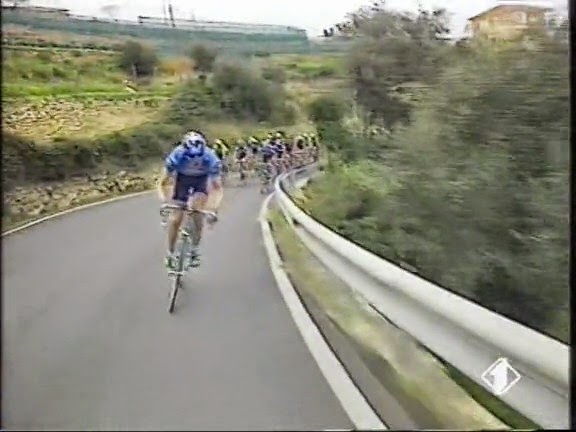 The honour of getting first on the famous right corner, the start of la Cipressa, belonged to the
Roslotto team. But after only some meters in, Frattini and Berzin started to make the race for Gewiss. And they didn't mess around, putting the whole peloton in one big line and in a hell of pain. MG's Jaermann paced it even faster, everyone having to break hard in the corners at this point.
Surely, the pace was too high for an attack, wasn't it? Apparently no because Gabriele Colombo(Gewiss), riding an insane gear,blasted through the motorbikes and immediately put a good gap on the peloton. Only Alexander Gontchenkov(Roslotto) managed somehow to catch him. Claudio Di Benedetto, reporting live from a TV motorbike is almost shocked by the surreal speed: " The speed is impressive...On the first ramps, they did 40 km/h. Now with the attack, they reached 50 km/h..."
Colombo didn't even ask any help from Gontchenkov to the top, where they had under 10 seconds on a 20 riders group. But with their brave, monstrous long range attack they definitely achieved to tire out the peloton. So besides setting the record speed on Cipressa, they also managed to finish on Via Roma... first and second!